Other Women Key to Novel Writing 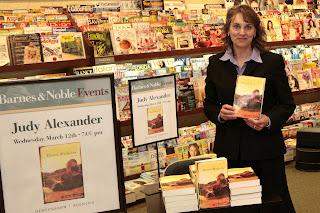 In my recently published novel, Desert Medicine, the characters shatter Christian stereotypes. They do not remain persistently optimistic and pray all their problems away. Their true-to-life struggles resist simple, quick solutions.

This novel was inspired by my own life struggles and return to church as a single mother. The church I joined was full of other people like myself, who had made big mistakes.

Here’s how it started: Twenty years ago, I was a young woman who had a lot going for her. I had a college education, a husband, a young son, and my own home. My main struggle was my confusion about what to do career-wise, in the wake of a failed attempt to sell securities and then later to run a wholesale bakery which ended up an unintentional nonprofit endeavor. I’d closed the bakery and was in the process of considering a career in writing when my life took an unexpected turn: My marriage ended. Because I’d been raised in an intact Christian family, it had never occurred to me that my marriage wouldn’t last until death.

Although raised in the church, once on my own, I’d let church attendance lapse. Now I knew that I needed help, for my young son if not for myself. But I was a little nervous about returning to the church. I was afraid that Christians would judge me harshly, now that I was a soon-to-be-divorcee. So, instead of returning to my childhood congregation, I tried a neighborhood store-front church that I’d happened upon one evening while on a walk with my son.

The first time that I attended Orange Coast Community Church, the greeter gave me a big hug and warmly welcomed me. The church was a small, Bible-based church. Apart from spiritual instruction, one wonderful thing that a church offers is access to intergenerational relationships that are often lacking in today’s families that are fragmented by divorce or geography. Almost immediately, two women who’d gone through divorces took me under their wing: Kathy, who’d once been a single mother with three children, and Meg, who’d mothered four. Both had since remarried.

While Kathy and Meg understood what I was experiencing, they weren’t going to allow me to wallow in self-pity. When Kathy saw me sitting in church clutching my son to my chest like a security blanket, she gently, but firmly, suggested that I allow him to go to the nursery and play. When Meg found out that I was phoning my ex-husband, then crying uncontrollably when he responded coolly, she lovingly, but wisely, suggested that I stop putting myself in the position of victim. Neither one ever beat me over the head with Scripture, but I knew that their joy in the wake of personal tragedies came from a close relationship with Jesus.

By words and example, Kathy and Meg taught me to take responsibility for the part I’d played in my divorce, but then to accept God’s forgiveness and consider myself completely clean and new in God’s sight.

I’d been a little afraid that returning to the church meant that I’d have to become a more docile, demure sort of woman, especially if I wanted to marry a Christian man. But both Kathy and Meg defied my stereotype of a Christian woman, because both were strong-willed women with fully used their many interests, gifts, and accomplishments. In addition to being a pastor’s wife, Kathy was a wonderful family counselor. Meg was a tireless musician, singer, and choir director. Both were living examples of the good servant in Matthew 25, who refuses to bury his talents.

Because I could watch Kathy’s and Meg’s relationships with their second husbands, I saw that it was possible to meet a Jesus-loving man who had a strong moral code but also a wonderful sense of humor. Neither man was a stereotypical Christian husband demanding subservience from his wife. Instead, these men had marriages that were true partnerships and in which the wives’ accomplishments were celebrated as warmly as the husbands’.

When I began dating again, Kathy served as a wise, older woman in giving me feedback on my choice in men. Her insight gave me the confidence to continue a relationship with a Christian man who I was strongly attracted to, but who was very different from myself. I was afraid that this new relationship would end up as badly as my first marriage. With her blessing, I married Gene. Both Kathy and Meg provided the post-marriage support I needed when I discovered that even marriage to a good man can have rough patches, especially when trying to blend families. By both words and the example of their own marriages, they taught me to celebrate my husband’s strengths that were so different from my own and to realize that together, Gene and I made a better “whole’ than either of us had been on our own.

Meanwhile, with the support of this Christian family, I was blossoming in my creative life, too. With my personal life stabilized, I felt free to be more daring in using my talents and I returned to fiction writing.

After attending the church for about a year, I was able to extend the love and acceptance to a neighbor woman. At that time, I walked to church with my son who was a couple of years old. He was always as stubborn as I was, so our walks to church involved me snipping at him and slapping his backside with my Bible to keep him moving. Obviously, this wasn’t the best possible Christian witness to any neighbors who might happen to see me walk by.

One day, after I got home from church, the crazy neighbor lady from across the street appeared at my door. I didn’t really know her, but I’d heard that she used to scare the children on Halloween by standing out in front of her house without her teeth in, and she didn’t even have to wear a costume to impersonate a witch. So I was a little shocked to find her on my front porch. She said that she’d seen me walk by that morning with my little son. I braced myself, because as a single mother I was defensive about my parenting, and I knew that she must have seen me swatting my son with the Bible to keep his legs moving.

Instead, she said something totally unexpected, “I looked out the window this morning, and I seen you and your son go by, the same way I seen you every Sunday, and I thought, Why, she’s got a friend going with her this morning, isn’t that nice, the three of them walking together. But the more I looked, the more certain I become that that was a real special friend, not of this world. And I said to God, Lord, I’ve had my fill of church, all them people so judgmental and all, but I want what that girl has, and I don’t care what kind of church she’s going to, they might all be speaking Spanish or Chinese for all I care, that’s what I’m going.”

Then she asked me, “Was there three of you walking by?”

I told her that it had just been me and my son.

“That’s what I thought,” she said. “I’m not in good health, but I told my husband this is what we’re doing, so he’s behind me. You don’t mind, do you, Honey, if I come to church with you Sunday?”

And that’s what she did. And she didn’t wear her teeth. And most times she came in a muumuu and bedroom slippers, but she won over the entire congregation with her storytelling and humor and honesty.

I felt compelled to take her story and turn it into a work of fiction. That’s how my novel, Desert Medicine, got its start. Desert Medicine, published by Kregel Publications, tells the story of two women, one a young mother of twins going through a divorce who refuses to feel sorry for herself and joins a church full of quirky misfits, and the other an older, tragedy-prone woman who’s struggled her whole life to find a sense of family, beginning in Panhandle Texas and continuing in Calexico, California, where she was sent to live with an aunt who ran a home hospital.

Desert Medicine pays tribute to God’s unexpected use of damaged people. I’m so thankful to know that God can use even me.

To read more about myself and my novel, visit:
www.judyalexander.com
Photo: I recently signed copies of my novel Desert Medicine at a Barnes & Noble bookstore in Costa Mesa, CA.
Posted by Judy Alexander at 8:50 AM No comments: