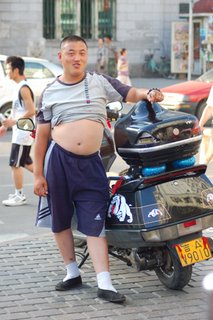 At work, I was asked to take a photo to accompany an article. Later, my boss asked me how it went, and it was only then, after I'd already successfully and uneventfully taken the photo, that I realized my boss had expected the subject to strongly object to the photo taking, and that's why I'd been given the job.

Something similar happened years ago when I was an exchange student in Finland, and my host-family sister and her friends went to a neighbor's house to ride a horse. The girls-who all knew so much more about horses than I did and only brought me along because my host-family mother had insisted that they invite me-suddenly became very generous to me. They asked me if I'd like the honor of going into the stall and putting the halter on the horse. I was flattered and quickly agreed. I didn't know what I was doing, and the stall was really dark, and the horse was big, but somehow, after several false starts, and with encouragement from the other girls who stood firmly outside the walls of the stall, I got the halter on and led the horse out of the stall. That's when the girls took over. Only later did I find out that they'd allowed me to put on the halter because they were scared to be in the stall with the horse: It was bad-tempered and usually bit whoever tried to work near its head. My incompetence had apparently distracted the horse from its normal bad behavior.

My point: Good things can happen when you're too naïve to know the task is impossible.

Photo: A local man in the Guogeli section of Harbin, China, July 2006.
Posted by Judy Alexander at 7:14 AM No comments: