Self Promotion Takes a Mechanic 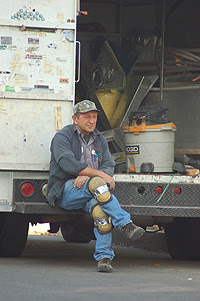 In my day job, I do “marketing communications” writing at a large company, and I’ve twice taught a college course about public relations, so you’d think that I’d be an excellent at self-promotion. Wrong! It’s one thing to try to promote a product or someone else’s story, and it’s quite another thing to try to package and sell yourself! What’s my “issue” or “message”? Who is my “audience”? Do I have a “platform”?

To help me sell my novel, Desert Medicine, I’ve hired a good friend to be my freelance publicist. She’s originally from my church in Orange Country, but she’s now living in (and loving!) Arkansas. She’s got all the traits of a great publicist: She is intelligent and witty and persistent and has a great phone voice and doesn’t at all mind maintaining Excel sheets of media contacts. So, Sandra D. Brown is giving me the confidence to apply my marketing skills to myself and my novel, Desert Medicine.

I was introduced to the idea of paying for a freelance publicist years ago, when a guest speaker came to the writing class I was taking. Barbara Seranella was a wonderful guest, so straight-speaking and encouraging to other writers. She had a pragmatism about her that was refreshing, reminding us writers (who tend to be thin-skinned and idealistic and unrealistic about the prospects of our “art” being magically “discovered”) that publishing is a business and that we should be willing to invest in our own business and to do the hard work necessary to sell the products (novels) that our business produces. This wonderful woman, who had to overcome an early life of wildly dangerous decisions, beginning with running away from home at age 14o join the hippies in San Francisco, recently died at the too-young age of 50. The world lost a good writer, a kind-hearted but pragmatic mentor, and a fascinating human – a writer’s soul in the body of an auto mechanic.

So, Sandy and I are applying auto mechanics to the business of being a novelist. What are we doing now, eight months before publication of Desert Medicine? We’re putting together:

In the meantime, I’m still working on my “issue.” At the San Diego State University Writer’s Conference that I attended at the end of January, super-publicist Milton Kahn said that a novelist can’t just talk about her novel. For one client, he discovered an “issue”: She’d once picked up a hitchhiker who turned out to be a mass murder. Wow! The lengths authors will go to publicize their books!!

Photo: A man who isn’t afraid of hard work. I rode past on bicycle, and he agreed to let me take his photo.

Posted by Judy Alexander at 3:12 PM No comments: 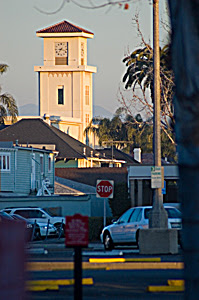 I’ve heard it said that writing and editing your novel, and then finding a publisher, may take years (as it did in my case), but that’s still just step one. The next step is encouraging people to buy the book.

Towards that end, the teamwork of book publishing has begun in earnest. I’m working closely with Kregel’s marketing manager. I’ve filled out the forms that she sent me, that will help the team market my novel, asking questions about me and about my novel Desert Medicine (25-, 50-, and 200-word summaries of the book, how did I meet my husband, where would I like to travel.)

My husband Gene took “author” photos of me, using the local Starbucks as a backdrop, because that’s where I spend a lot of time writing.

Yes, if I think too long about my lack of experience and the thought of all the public speaking ahead of me, I can hardly breathe. But then, life’s not boring!

Photo: Chapman University tower as seen from downtown Orange, California
Posted by Judy Alexander at 4:17 AM No comments: