Juggling Personal Ambition and the Needs of Others 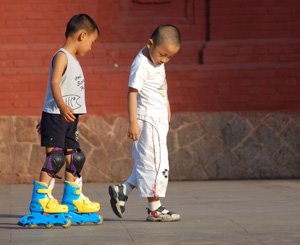 A couple of years ago, I attended a lecture delivered by a successful corporate woman turned corporate consultant. Afterwards, I was haunted by her talk, not because it had inspired me to advance my corporate career, as the speaker had intended, but because it had seemed to me a cautionary tale. She'd told about her climb up the corporate ladder, reaching the level of director before age 35, while giving birth to two children (her husband raised them) and traveling the globe. She'd explained the networking that she'd had to do in order to climb the corporate ladder, including going out drinking with the guys. And when someone in the audience suggested that being mentored by men in the office might lead to sexual tension or misunderstandings, she completely dismissed the question: "We're all professionals." At that point, I began to suspect that she was not completely honest about her life, and about the price that she'd paid for her personal success.

Days later, I was still obsessing about the decisions that this woman had made. And I kept imagining the regrets she must hide, about being so absent from the early years of her children's lives. There must be some reason that she'd decided to go into consulting, which gave her a more flexible schedule, instead of continuing in the corporate world - maybe now that she saw that her kids would soon leave the nest, she finally wanted to have a relationship with them. She'd made the same mistake that many corporate fathers make: She'd let her unbridled personal ambition rule her life, at the expense of her family's needs.

After hearing her talk, I wanted to leave the corporate world completely behind. But I finally calmed down and reminded myself that to avoid making the same cold-hearted decisions that this woman had made didn't mean that I had to swing completely in the other direction and become a fulltime homemaker. Maybe, instead, there was a middle road that would give me a balance between personal ambition and the needs of loved ones. Maybe corporate life could be part of my life without my having to turn into a woman willing to sacrifice my family in order to climb the corporate ladder.

Writing Despite a Full Life 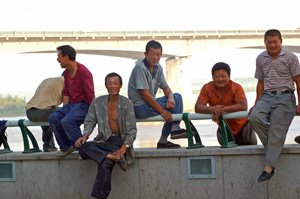 I once watched a TV movie about Churchill's later years, right before he assumed leadership of England during WWII. He was a great writer who set a goal of 2,000 words every day. He usually met that goal despite a full life that didn't allow him to devote himself exclusively to writing. Shouldn't I be able to write a fraction of that amount on a regular basis?

Photo: Men along the Songhua River in Harbin, China, not far from my hotel room. 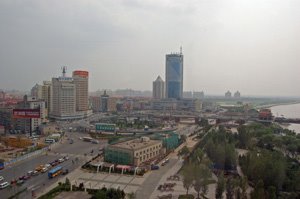 I think that I'm finally, finally, getting to a point in my own writing when I'm realizing that not everything I write is priceless. That whatever I write, no matter how "creative," isn't really worthwhile unless a reader can follow along. That of the many, many words that I'll write in this lifetime, only a fraction will reach an audience, and probably only a fraction should - just as we speak millions of words every year that are not interesting enough to repeat, so we writers write many, many words that are just not all that interesting.

What I'm trying to say is that I'm finally, finally becoming more pragmatic about the act of writing. Yes, wonderfully creative, divine moments happen during the writing process. But even the writing that results from those magical moments has to be edited into a format that is consumable by readers. Unless, of course, I just want all my writing to be journal entries to myself.

Photo: Harbin, China in July, outside the window of the hotel where my baby brother was married.
Posted by Judy Alexander at 8:15 AM No comments: 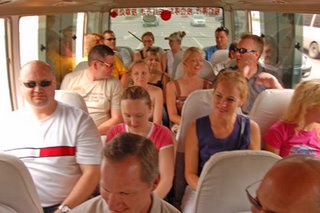 My dad died two years ago of a sudden heart attack. I think he would have been proud of us during our summer vacation. Almost the entire extended family took a trip to Harbin, China, to attend the wedding of my youngest brother to a Russian girl. Everyday, all 20 of got on a bus and toured various parts of the city. My mother says that the best part of the trip for her was listening to all of us laugh and enjoy each other's company, far away from our daily responsibilities. Here's a picture from the bus, with some of my family, some of the bride's family and friends, some of the groom's friends, and the American pastor and his wife who spoke Russian and Chinese.

Posted by Judy Alexander at 7:27 AM No comments: