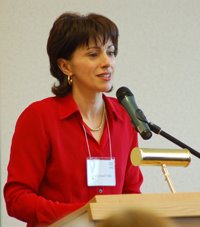 When attending writers' conferences, I'm looking for inspiration and publishers and agents. But I'm also looking for role models. And unfortunately, so many writers turn out to be just as flawed as the general population, and sometimes even more so: crankily antisocial or wide-hipped or militantly anti-attractive.
So, this year I was so pleased to find not just one pleasant, attractive, talented female writer, but four. These four are all intelligent, humorous, dark-haired, slender literary women writers who also happen to be Christian:

At reading from her most recent book, Surprise Child, which tells about her
emotional struggles when finding out that she was pregnant with her fifth son
at age 45, Leslie Leyland Fields says that the child was a surprise to her,
but not to God. "My pregnancy became a constant lesson in relinquishment."

What Lauren Winner misses most about Orthodox Judiasm, besides the people,
is the daily-life sense that we're living in a sacred universe. She recaptures
some of that sense by belonging to a church which reveres the sacrament of Holy
Communion.

Alice McDermott believes that the artist reveals how something in our nature
rebels against our destiny. We are hopeful despite impending death. In the face
of our suffering, there is the hope of redemption. Every creative act is an
act of faith.

Mary Karr was a literary community member-in-good-standing before she became
a Christian. When she converted to Catholicism, her literary friends acted like
she'd admitted to something kinkier than a perverted sex act.

How do Leslie, Lauren, Alice, and Mary integrate their spiritual and artistic
lives, in a culture that tends to separate the two? Alice sees her job as a
novelist to lead her characters to the point where they realize that they need
redemption, but doesn't try to wrap up their stories with tidy solutions.

Leslie, Lauren, Alice, and Mary all have a great sense of humor and are pragmatic
about hard work. "You have to be willing to fail," Mary says, noting
that even if God directs her to write a book, that doesn't mean that that particular
book will be successful. "Maybe God wants me to learn about failure and
perseverance."

Posted by Judy Alexander at 7:28 AM

I enjoyed reading about your quest to meet other woman writers.

I cannot claim many published works as most of my finished work is collecting dust. However, I am still writing, hoping, praying and learning.

I have long dark hair with a slender build. I am a grandmother and a single mother of a fifteen year old boy. I work full time marketing commercial insurance, and I write sporadically - when I have the time and energy.

Thank you for reminding me that there are others out there - I am not alone.