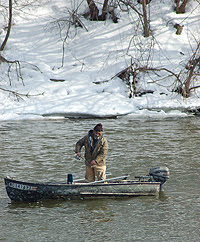 My trip March 6-8 to Grand Rapids, Michigan went really well. I met the team at Kregel Publications. I was impressed with their operations (they are larger than I expected, with at least 25 folks). They all have a Midwestern sense of understated humor, which I really like. I easily see us working together on the next book. I almost cried when I arrived and saw that the receptionist had put out a sign: Kregel Publications Welcomes Judy Alexander.

I also visited local bookstores, a book club, a writing group, a large women’s ministry at Calvary Church, a Calvin College professor who assists with the Festival of Faith & Writing, and I spoke at a retirement home about the importance of telling or writing your life story, which is what one older woman did with me, thereby inspiring the writing of Desert Medicine. That talk went well, and the activities director told me in an email that I’d inspired several residents to begin writing their memoirs.

I gave most people I met a flower bulb tied with a bow in netting, to which was attached a business card mentioning my website and suggesting they read chapter 6 of Desert Medicine to learn how to plant the bulb. The trip reinforced my concept of myself as an “author,” which was very flattering and fun.

Photo: Fishing in Grand Rapids in early March.
Posted by Judy Alexander at 10:14 AM